These personalities can be both the boldest of dreamers and the bitterest of pessimists. Architects believe that, through willpower and intelligence, they can achieve even the most challenging of goals. But they may be cynical about human nature more generally, assuming that most people are lazy, unimaginative, or simply doomed to mediocrity.

Architects derive much of their self-esteem from their knowledge and mental acuity.

But as anyone with this personality type would tell you, a new idea isn’t worth anything unless it actually works. Architects want to be successful, not just inventive. They bring a single-minded drive to their passion projects, applying the full force of their insight, logic, and willpower. And heaven help anyone who tries to slow them down by enforcing pointless rules or offering poorly thought-out criticism.

This personality type comes with a strong independent streak. Architects don’t mind acting alone, perhaps because they don’t like waiting around for others to catch up with them. They also generally feel comfortable making decisions without asking for anyone else’s input. At times, this lone-wolf behavior can come across as insensitive, as it fails to take into consideration other people’s thoughts, desires, and plans.

Architects aren’t known for being warm and fuzzy. They tend to prioritize rationality and success over politeness and pleasantries – in other words, they’d rather be right than popular. This may explain why so many fictional villains are modeled on this personality type.

Because Architects value truth and depth, many common social practices – from small talk to white lies – may seem pointless or downright stupid to them. As a result, they may inadvertently come across as rude or even offensive when they’re only trying to be honest. At times, Architects may wonder if dealing with other people is even worth the frustration.

Arrogant – Architects might be knowledgeable, but they’re not infallible. Their self-assurance can blind them to useful input from other people – especially anyone they deem to be intellectually inferior. These personalities can also become needlessly harsh or single-minded in trying to prove others wrong.

Dismissive of Emotions – For Architects, rationality is king. But emotional context often matters more than people with this personality type care to admit. Architects can get impatient with anyone who seems to value feelings more than facts. Unfortunately, ignoring emotion is its own type of bias – one that can cloud Architects’ judgment.

Overly Critical – These personalities tend to have a great deal of self-control, particularly when it comes to thoughts and feelings. When the people in their lives fail to match their level of restraint, Architects can become scathingly critical. But this criticism is often unfair, based on arbitrary standards rather than a full understanding of human nature.

Combative – Architects hate blindly following anything without understanding why. This includes restrictions and the authority figures who impose them. People with this personality type can get caught up in arguing about useless rules and regulations – but sometimes these battles are distractions from more important matters.

Romantically Clueless – Architects’ relentless rationality can lead them to be frustrated by romance. Especially in the early stages of a relationship, they may struggle to understand what’s going on and how to behave. And if their relationships fall apart for reasons they don’t understand, they can become cynical about matters of the heart, even questioning the importance of love and connection. 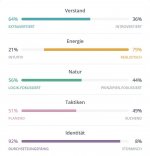